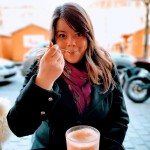 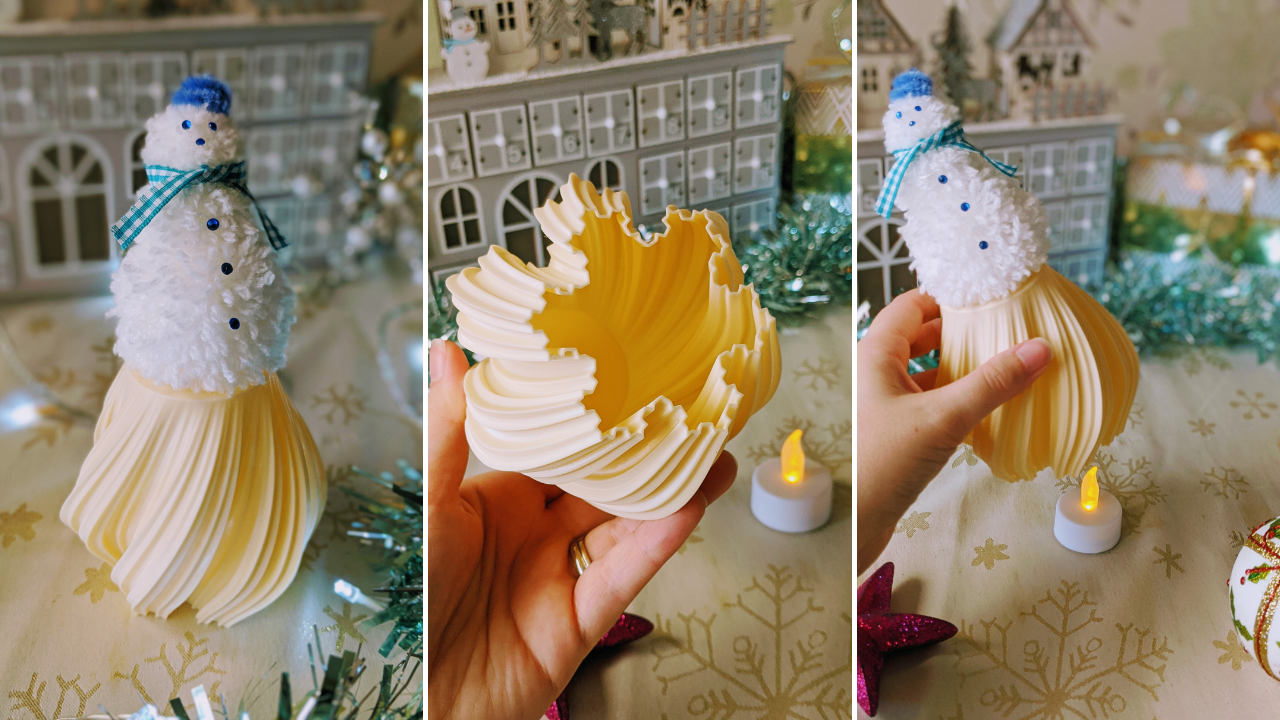 July 4, 2022Justine Jenkins5 min readAdd comment
Psst! This blog post probably has affiliate links in it, which earn us a small amount of commission if you buy something through them... at no extra cost to you.
8 shares

The inspiration for our DIY pom pom snowman ornament came from an unexpected place to be honest.

Scott had 3D printed a vase that was shaped like a snowflake, but the sizing came out a little wrong, which meant the vase was now too small and narrow to what we wanted inside.

Not wanting to see the plastic go to waste, we joked that it would make a decent plinth or stand if you just turned it upside down. But what would suit a small snowflake plinth?

Why a snowman of course! And not just any snowman – a Christmas pom pom snowman (inspired by this little guy).

So our 3D printed snowflake vase got turned into a plinth fit for a snowman.

Then we had the idea to pop a flameless candle inside so our new friend would have a little glow at his feet. After all, it’s Christmas so shouldn’t everything have a bit of sparkle and light?

The great thing is that you can make your own DIY pom pom snowman (or woman!) and stand him or her on top of anything that would make a decent plinth or upside down lantern, such as a mason jar, a tin can with patterns cut into it or your own lantern cut out from some thick card.

How To Make A Pom Pom Snowman Christmas Ornament

Your first step is to make the balls of snow out of white wool or yarn.

Wrap your wool around and around four fingers of your hand (or you can use a pom pom maker).

It can take some trial and error to get the right number of times for different sized pom poms but you’ll want to do it at least 100 times).

If you’re unsure and don’t want to waste wool by doing this step multiple times, then go for a bigger number of “wrap arounds” as we’ll be trimming our balls to shape anyway. It’s best to start with a larger ball that can trimmed to be smaller.

Once you’ve finished wrapping your wool around your hand or pom pom maker, tie and knot a piece of wool tightly around the middle of your pom pom. But don’t cut the ends off yet.

You should now have two openings on either side of where you tied your extra wool that you can slip a pair of scissors through. Very carefully, cut through these “tunnels” of wool so you have a shaggy pom pom at the end hanging from your extra piece of wool (like a messy snowball Christmas tree ornament!)

Now it’s time to give your ball a little trim so it’s tidier, fluffier and much more snowball-esque.

Repeat this section until you have three balls that sit neatly on top of each other from big to small – just like a snowman. You could also do just two balls if you want.

Now that you’ve got your balls, you can tie two of them together using the trailing ends of wool. These should act like ties for you to bind the pom pom balls together. It’s best to do this for the larger balls at the bottom.

The third ball can just be glued on top using a hot glue gun. And if your balls are a little wobbly at the bottom, then you can also a dab some glue on their bottoms to help make them a bit sturdier.

Once you’ve done that, you can carefully snip the ends of the trailing wool that you used to tie the balls together. But DON’T SNIP ALL THE WAY!

You’ll want to leave tiny little ends so that you don’t cut through the knot that’s helping to keep your wool in a pom pom ball shape.

Do you have a shape that resembles something of a snowman now? Great, now for the fun part! You need to dress your snowman.

You’re welcome to dress your snowman however you like but to help you get started, here’s what we did with ours.

We initially wanted to make him a set of earmuffs with a pipecleaner, but I wasn’t a huge fan of how that one came out.

So instead, we opted for a simple hat the next time, which we made by wrapping a piece of pipecleaner in a sort of tiny swirl a few times until it looked a little like a bobble hat. We then glued this onto his head.

Then we tied a piece of ribbon around his neck to look like a scarf. You could tie his scarf to one side or down the front – it’s totally up to you!

Then you’ll want to add some eyes, a nose, maybe a mouth and some buttons down his front. We kept things simple by using the same blue stick-on gems for all of these details.

We love how he looks like he has a cute little button nose and oodles of personality. He’s miles better than our first attempt!

That one looked like he had something kind of scary and cartoonish going on with his mouth, so we decided against a mouth for our next snowman.

But again, it’s up to you. Don’t be afraid to play around with things a little bit as each snowman pom pom will come out with their own kind of personality and look.

Grab whatever you’re using as a plinth; something 3D printed, perhaps? Or maybe a mason jar, tin can or whatever else you fancy and glue your cute little pom pom snowman onto the base of your homemade plinth.

You’ll now have an opening at the bottom to slip a flameless candle inside.

And voila! You have a very fun, very cute DIY pom pom snowman Christmas ornament to light up the dark days.

Don’t forget! If you’re using something opaque for your plinth like a tin can or something cut out from thick card, then you’ll want to cut out patterns in it so the light from the candle can filter through.

Of course, there’s also no reason why your pom pom snowman needs to be an ornament! You could make a whole bunch and turn them into a snowman garland, hang some from your Christmas tree or just sit your snowman on your desk to cheer up a grey afternoon.

If you like this pom pom snowman craft, then take a look at our other Christmas crafts: 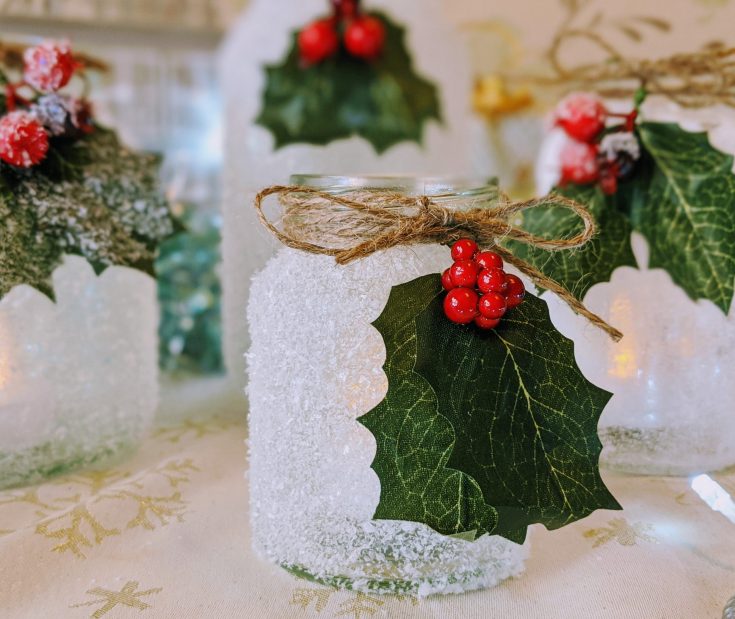 How To Make Christmas Luminaries With Mason Jars

Find out how to make these Christmas luminaries with mason jars for a pretty addition to your festive display. 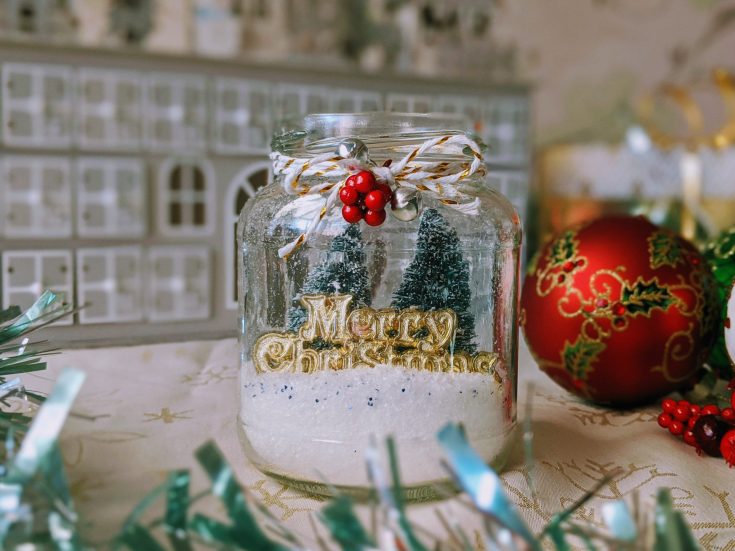 Here's another sweet Christmas ornament idea, this time made from mason jars. They're so simple to make, you could easily have a whole batch made up in a matter of minutes! 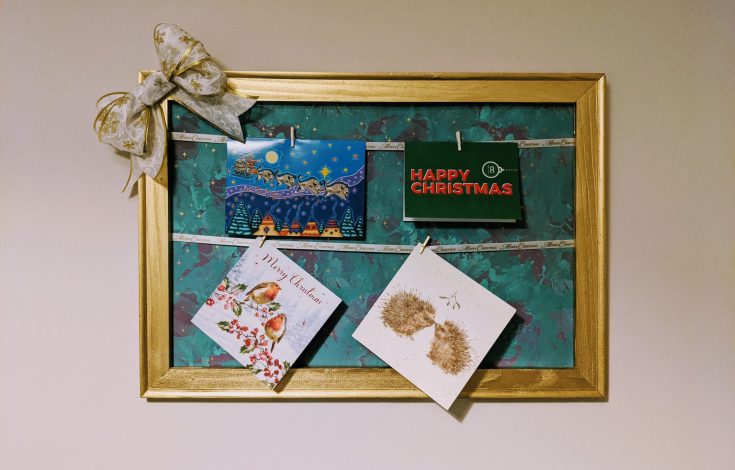 If you want to hang your Christmas cards on something a little bit different, then take a look at this easy DIY Christmas card holder tutorial. It will look so lovely hanging on your wall! 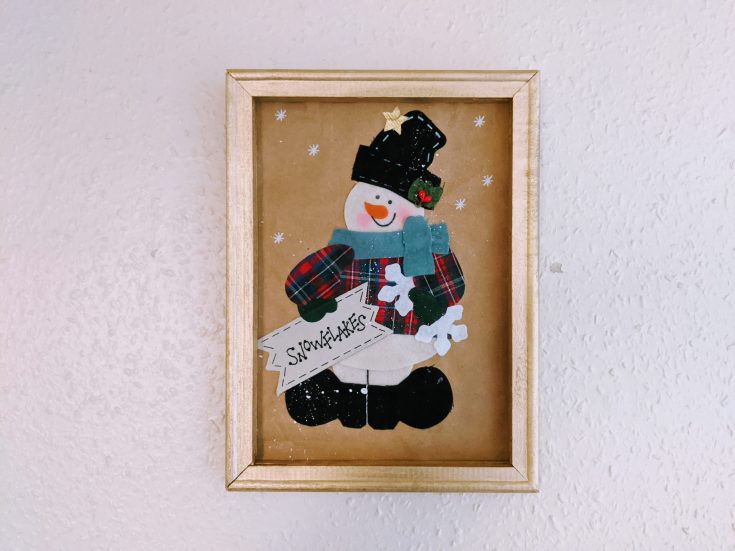 How sweet is this gift bag wall art? This is such an easy craft if you're not sure what to do with your old gift bags - and is something you can admire for many more Christmases to come. 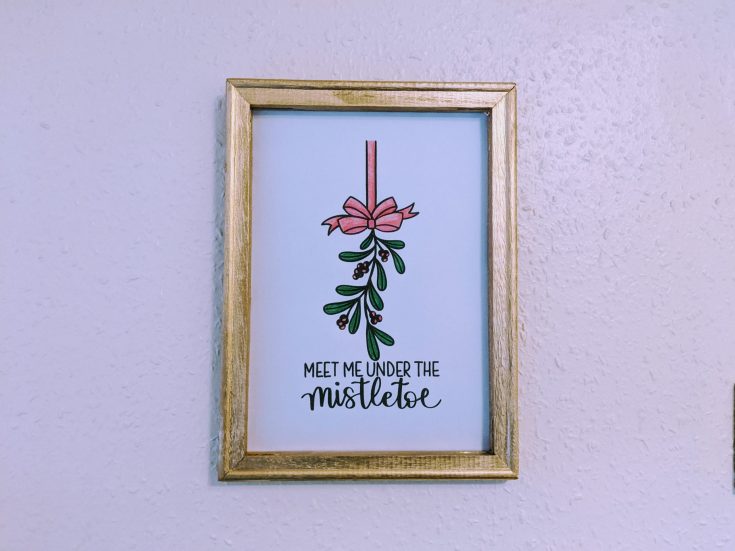 Meet Me Under The Mistletoe Sign | Easy DIY Christmas Decoration

This festive Meet Me Under The Mistletoe sign also uses the reverse canvas technique. It's so cheap and easy to make. You don't even need a Cricut machine!

We hope you like your new little friend and Christmas ornament!

If you make anything inspired by this tutorial then we’d love to see it, so tag us on Instagram @houseofmahalo!

Do you like this DIY pom pom snowman ornament? Pin or bookmark this tutorial now, make one of your own later!

8 shares
If you're finding my blogs and videos helpful, I would love it if you would consider donating to my "Buy Me A Coffee" site. Thank you so much for your support xoxo
3D Printing Christmas Crafts Craft Blog DIY Home Projects 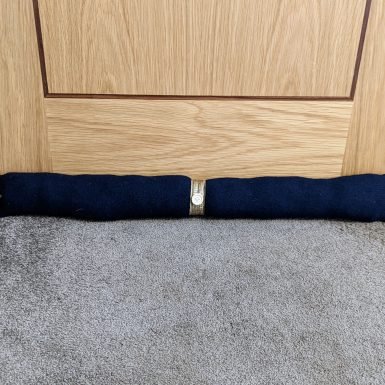 How To Upcycle A Sweater Into A DIY Draught Excluder 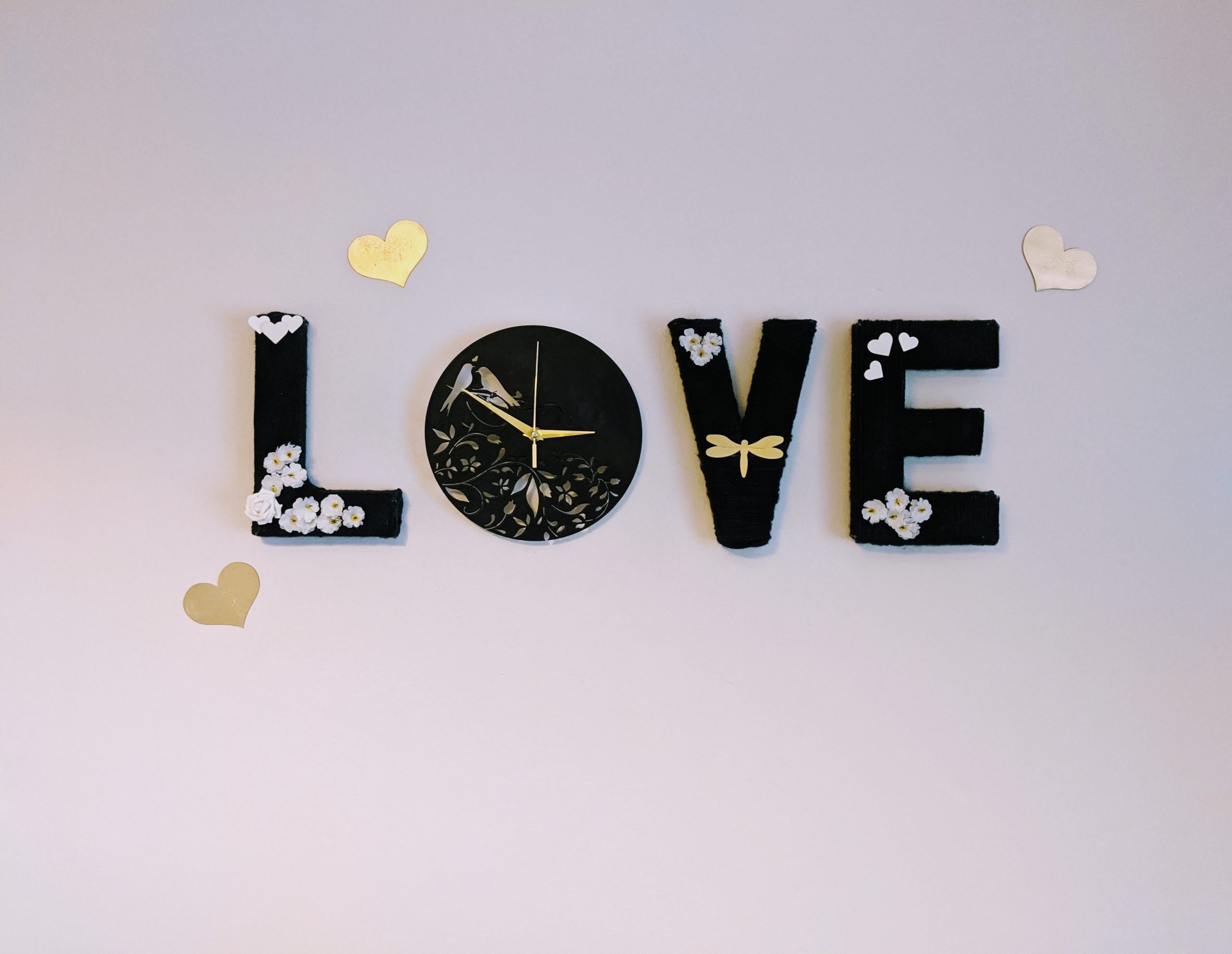 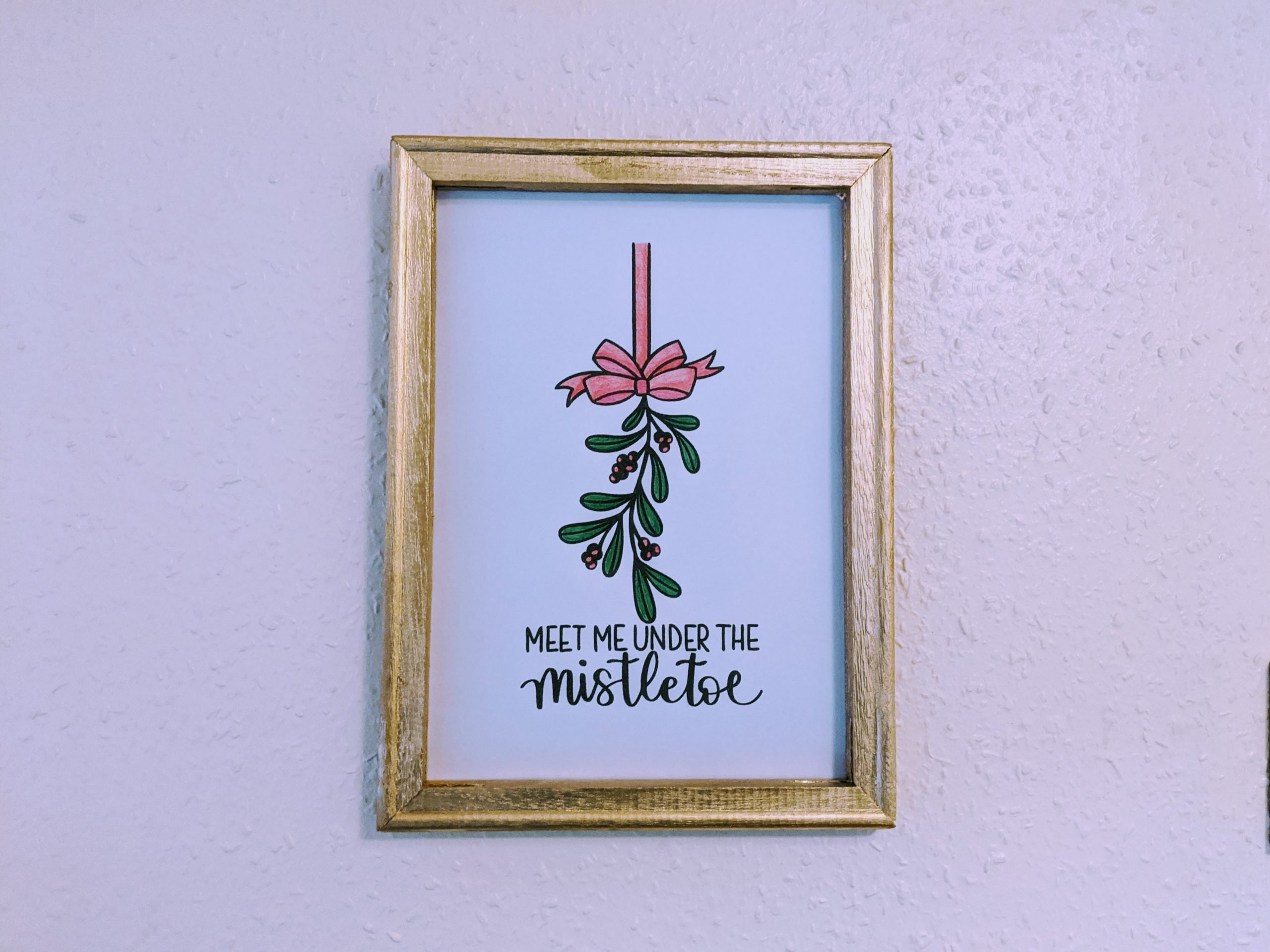 Meet Me Under The Mistletoe Sign | Easy DIY Christmas Decoration 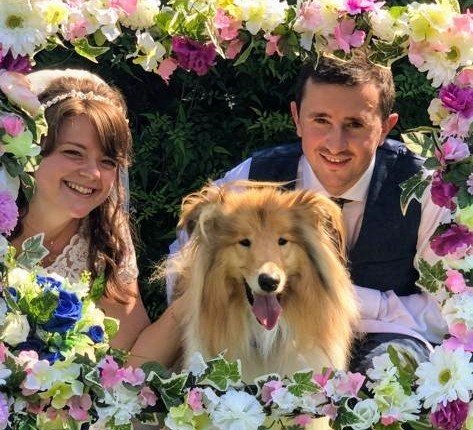